I’m Ryan, aka Clone 1, and I’m just getting back into Star Wars CCG after a 20 year hiatus.

To help myself and others get back into the game I’m going to produce a series of blog posts with increasingly sophisticated decks.  I want to learn (or re-learn) the cards, rules, virtual cards, and everything I’ve missed out on but in a deliberate and fun way.

Fortunately I have the support of my brother (Brandon aka Boba) who participated in Nationals this year.  And of course everyone has the support of the Players Committee Forum.

Follow along on how to get back into the best game in the galaxy.

If you don’t have the cards handy today (maybe they’re being shipped) check out Players Committee Card Lists to view the cards.  All of the cards are from Premiere, A New Hope, or Premium.  To follow along online you can construct the decks in Gemp and view/play virtually.

I used the Enhanced versions of Darth Vader With Lightsaber and Obi-Wan With Lightsaber to reduce the overall deck cost as well as ensure that each character is equipped for a proper duel.

In tournaments Epic Events aren’t favored as they are hard to achieve and generally specific to your opponents deck (it’s hard to blow away Hoth generators if your opponent is on Yavin 4).  The decks I’ve created are focused on Epic Events because they’re awesome, easy to understand for a returning player, and create an amazing theatrical experience that made so many of us Star Wars fans fall in love with the game.

Note the rules on Battle Damage from Commence Primary Ignition and Attack Run:

The beauty of Star Wars CCG is that the game can unfold in an unlimited number of ways.  Below I’ve listed out a number of potential combinations. 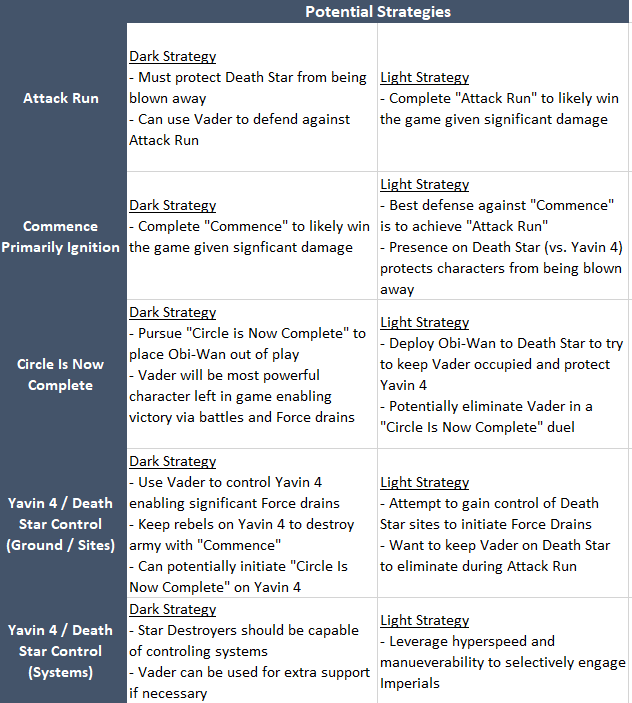 Which strategy to pursue will depend on what cards are drawn and played initially as well as opponent’s strategy.

For example, if the Imperial player initially draws Star Destroyers and Tie Fighters their strategy may focus on controlling systems and preventing an Attack Run.  The Imperial deck has the firepower to control systems so this should be an effective strategy.

If the Rebel player draws Obi-Wan and other characters they may focus on entering and controlling Death Star sites for Force Drains (check out the Trash Compactor location text for how to enter the Death Star).  This pressure will require Vader to counter which will prevent Vader from resisting an Attack Run or wreaking havoc on Yavin 4.

I’ve tried to make these decks both simple and balanced across many different strategies (sites, systems, Epic Events, etc.).  Each deck can be offensive or defensive across each objective.  This contrasts to current tournament decks which (to my untrained eye) appear to focus on one specific (and devastating) offensive strategy combined with very broad defensive capabilities.  This makes sense in a tournament setting where you don’t know your opponents deck…but it also makes it far more difficult to just jump in and play with those decks.

I’ll end this post with a few tips and tricks I noticed at Nationals that can add depth to your strategies even with these simple decks.

I hope you are as excited as I am to jump into these decks and get back into Star Wars CCG.  Now that you’ve read the deck goals, strategies, and tips, purchase your deck and get playing!

Let us know via the comment section or email (bobafett@swccgstore.com) if you have any comments, suggestions, feedback on the deck, etc.

Proprietor of www.swccgstore.com View all posts by Clone 1

One thought on “The Circle is Now Complete: Returning to Star Wars CCG”